Professional sports is one area that has been heavily influenced by the emergence of social media applications. Twitter is one of the most commonly used apps by athletes because it allows them the ability to easily communicate with their fans. Unfortunately, most athletes are not properly trained or educated on how to utilize Twitter which can lead to misuse of social media.

A quick glimpse through Curry’s Twitter feed and it is clear to see why he can be found on the Forbe’s top 50 list. Curry has great graphics and he is inspiring both on and off the court.

The world of athletics has seen an increase in social media usage over the last several years. One of the most popular social media apps, Twitter, has become a platform for student-athletes to promote themselves. Although Twitter has been a positive tool, a simple tweet has the power to destroy an athlete’s reputation.

There are many risks and challenges that student-athletes face using Twitter. One of the biggest challenges in having a Twitter handle is that fans are always watching. Because of this, athletes have to make sure they are very careful about what they tweet.

Over the course of the last several years there have been series of questionable tweets by athletes with various levels of repercussions. The most recalled incidents include: Florida State corner Tyler Hunter tweeting about killing cops, Ohio State quarterback Cardale Jones posting his opinion on why athletes should not have to go to class, and 4-star corner Yuri Wright’s series of inappropriate posts.

Often times student-athletes may be left wondering, to tweet or not to tweet. The answer to this is that if a student has to stop and think about whether it is a good idea, it probably is not.

“So the question becomes: How can future recruits learn about how to properly use social media? Educating student-athletes and coaches about social media and the way it can be used as a positive tool is the perfect starting point,” (Kirpalani, 2013).

Another risk of student-athletes utilizing social media is how fans act towards them. The manager of New Media and Recruiting Services at the University of Washington, Daniel Hour stated:

“It’s discouraging to see the way they (student-athletes) are talked to or about on social media when they play poorly or decide on a school some fans may not approve of. It’s not so much the criticism, but the name-calling and misguided anger and hatred directed at these kids. I can’t even imagine how the players feel about it, but it must not be fun for them at all. I mean, they’re kids,” (Kirpalani, 2013).

Although there are many risks and challenges associated with student-athletes utilizing Twitter, it can be done in a positive and beneficial way. Education on how to navigate a professional athletic Twitter account is key in having successful student athletes.

The NFL is constantly switching up their game-plan when it comes to leading the sports world into the newest technology craze. The current buzz among NFL teams is how their stadiums have become the leaders in Wi-Fi, monetizing apps, and customer experience.

The NFL is revolutionizing the game day experience with game day apps that control the fan experience of the game. One company that is changing the face of game day apps is VenueNext. In 2014, the San Francisco 49ers opened their new stadium, Levi Stadium, which encompassed the most up-to-date technological infrastructure. In order to control all of these systems, the 49ers looked to VenueNext to, “elevate their fan experience.”

An app like VenueNext has given the ability of NFL teams to control every aspect of the game day experience. From giving fans the ability to order food from their seats, to collecting ‘fandom’ points, and exploring what is going on around you in the stadium, the opportunities to engage fans are endless.

In addition to these fan experience boosters, interactive videos and replays are a big part of the app system. The Game Center allows for fans to watch the game live, watch instant replays and check statistics and scores.

VenueNext has had a lot of success at Levi Stadium. Below is the breakdown of key usage stats in the first season.

It is clear that the NFL is keeping up with technological advances and are pushing the industry of sports to do the same. Whether it is using VenueNext or another similar app, the game day experience is being enhanced at a rapid rate.

“There’s no better way to reach your fans than social media,” North said. “If you want to think about what is the greatest strength of social media as far as a communication medium, it’s that we can all have what feels like a personal relationship with people that have some sort of celebrity. It’s the most amazing thing for audience-building and building a fan base. So the idea of coaches saying you can’t use social media is a little ridiculous in this day and age. The transition from rules against social media to social media training is a really important transition most organizations and schools are beginning to realize,” (Markazi, 2015).

The biggest tools that college and universities are utilizing to help improve their standings on social media accounts are education and visual communication.

“Break it down to them that this is your family, you represent your family first,” Campbell said. “When you make it personal, I think it has more traction,” (Osterman, 2015).

In addition to education, another way that collegiate athletics improve their standings in the social media environment is through their visual communications. Visual communications have become extremely important in the last several years. Take Clemson Football for example.

“The Tigers’ graphics and photos are consistent and eye catching, and their videos are fast-paced and snackable. Every post makes you feel like you’re getting an insider’s perspective,” (Twiford, 2017).

An additional example of Clemson’s graphics can be seen below. This photo was tweeted from the Clemson Football Twitter account wishing one of their alumni players luck in the next chapter of their career, with the NFL. 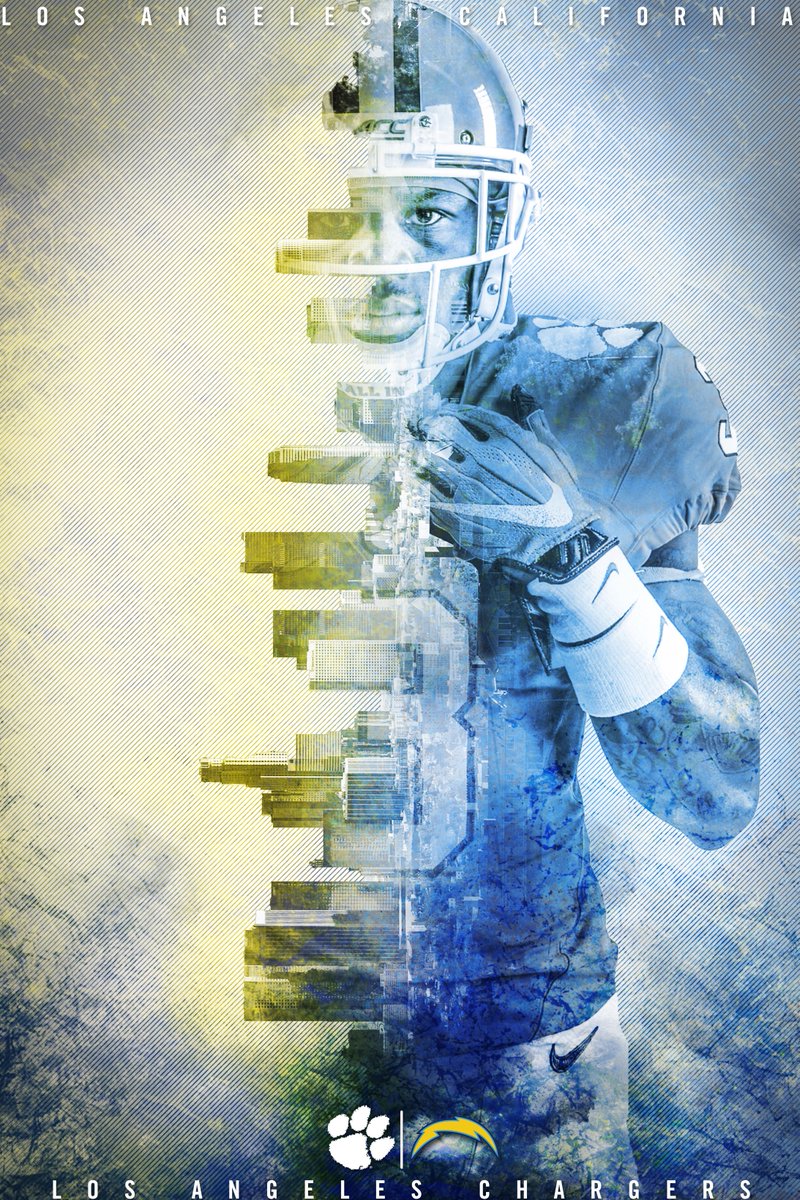 Markazi, A. (2015, July 21). Social media is a double-edged sword in sports world. Retrieved May 04, 2017, from http://www.espn.com/espn/story/_/id/13294924/larry-nance-jr-jj-watt-bret-bielema-illustrate-importance-social-media-how-athletes-portray

Twiford, K. (2017, April 05). The Best College Sports Teams to Follow on Social Media in 2017. Retrieved May 07, 2017, from https://librisblog.photoshelter.com/best-college-sports-teams-on-snapchat-twitter-instagram/

Sports organizations are constantly trying to keep up with the latest technology that enables them to successfully market their program and them apart from their competition. Most of the time, sports organizations find themselves utilizing aggressive marketing strategic via social media platforms. Whether a sports team is using Facebook, Instagram, Twitter, Pinterest, Snapchat or any combination of these, the amount of accounts to keep tabs on can be overwhelming. The good news is that there are many different tools that can be used in conjunction with social media apps to make the lives of those running them easier.

Founded in 2008, HootSuite is a company that manages social media accounts. In short, “HootSuite is a social media dashboard which allows organizations to schedule and publish messages to multiple social networks, monitor and filter conversations and track results to rapidly adjust outreach tactics,” (Glassman, 2010). HootSuite is a great platform for sports teams looking to ease the stresses of managing multiple accounts. A site that has 65% of NFL teams, 73% of NBA teams and 80% of NHL teams using it is definitely a site worth checking out, (HootSuite, n.d.).

AgoraPulse is similar to HootSuite but it offers even more. Like, HootSuite, AgoraPulse allows for its customers to monitor their social media accounts from one platform. Furthermore, AgoraPulse also has one component that HootSuite does not, and I believe is its best feature. AgoraPulse has the capability of collecting metrics on all of your social media accounts. This feature allows customers to view metrics such as: People Talking About This (PTAT), number of interactions, month by month historical data and more. Furthermore, with AgoraPulse you can watch competitors and track their metrics, (How, 2017).

Whether you are utilizing HootSuite, AgoraPulse or another tool it is important to lessen the stress of managing social media accounts. There are many tools that can aid in this process and it is important to select one that works well for your sports organization.

Next time on Pardon The Sports Blog, we will be discussing mobile social media applications and their driving forces within the world of sports.

Glassman, N. (2010, July 22). What Every Social Media Marketer Should Know About Hootsuite. Retrieved April 30, 2017, from http://www.adweek.com/digital/everything-you-need-to-know-about-managing-social-media-with-hootsuite/

It is tough to believe that the first social media site was only created twenty years ago. Since then, social media sites have exploded in popularity and have become essential for many businesses. Just like every other business, the professional sports industry has reaped the benefits of the advancements of social media outlets. Whether you are a team, a sponsor, an individual athlete or a fan, you can be engaged with the world of sports within seconds. Two social media outlets that have stood out in the sports world over the last several years, specifically within collegiate athletics, are Instagram and Twitter. These two social media platforms have been a place for teams and individual athletes to expand their fan base, connect and engage with fans, as well as promote the overall growth of their athletic department. University of Florida’s Dr. Alyssa Tavormina stated that, “Through social media, fans not only connect with sport teams and leagues, but the athletes themselves have accounts which allow potentially millions of fans to connect personally to the athletes and their teams. This direct connection has allowed fans to now be a part of the sport organization’s story,” (Clapp, 2017).

Instagram’s head of global sports partnerships, Brandon Gayle, stated, “Of instagram’s more than 500 million users, more than 165 million are seen as sports fans, and those fans follow on average eight different sports-related accounts on the platform,” (Strivastava, 2016). FC Barcelona is a team that currently utilizes Instagram in a very strategic way. This team engagements fans on Instagram by having quizzes, encouraging fans to wish players happy birthday, updating fans about new athletes on the team, cross-channel marketing such as use of hashtags as well as training images and videos of the team.

One of the biggest attractions to Twitter is how immediate it is for anyone to have the most up-to-date content possible. This is why sports teams utilize Twitter. Twitter can be utilized to engage fans in similar ways to Instagram however, there are some features that set Twitter apart. Twitter has the ability to stream live content. In addition to this, Twitter’s ability to provide concise and up-to-date information has been a huge draw for sports fans across the world. It has been stated that, “The platform’s versatility and its concise messaging make it the industry’s ideal real-time content provider and now a built-in part of the sports world,” (Burns, 2014).

Although there are many social media sites in the world, Instagram and Twitter are two apps that are vital to the sports world. If you do not already have accounts on these social media platforms, you should take a look at them and start discovering how they could  help your sports organization grow their brand.

Next time on Pardon The Sports Blog, we will be discussing tools used in management of social media accounts.

Shrivastava, T. (2016, September 9). Which Instagram Tactics Do the Most-Followed Sports Teams Use? Retrieved April 29, 2017, from http://simplymeasured.com/blog/which-instagram-tactics-do-the-most-followed-sports-teams-use/#sm.003grm9t1af2d50110l14vxyzj23o